The evaluation of the in situ conservation status of the prioritized CWR National Inventory was carried out using three parameters:

1) the ratio of population occurrences within protected areas (PA) over total occurrences.

3) the number and distribution of these ecogeographic units for each species.
Methodology

Distribution data of 128 species out of the 140 species in the food category and 167 out of the 184 species in the forage & fodder category of the CWR NI, were downloaded from the data portal of the Global Biodiversity Information Facility (data.gbif.org). Data were downloaded, species by species, taking into account possible mistakes in spelling and synonymy. Filters used to select data for download were the name of the species (with the above-mentioned considerations about spelling and synonymy) and country of origin (Spain).

Once all data were available a taxonomic harmonization was carried out following Flora Iberica (Castroviejo Bolívar et al. 1986 – 2013) or the Anthos project (www.anthos.org) when the genera had not been yet studied in Flora Iberica.

Results of this gap analysis are shown in the link below.
GAP Analysis - TOTAL RESULTS
Gap Analysis Results - Populations in PA 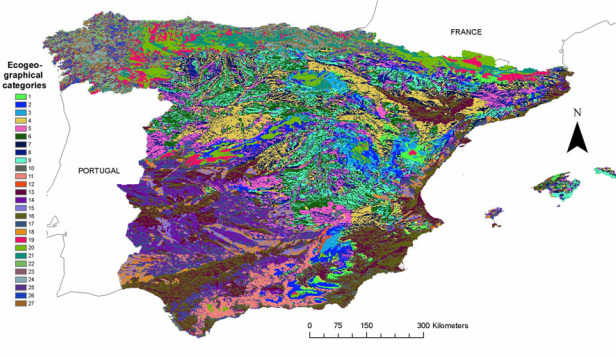 Ecogeographical Land Characterization (ELC) map developed by Parra-Quijano et al., 2011.
For the evaluation of the ecogeographic range of the total distribution of each species, total occurrences were compared with the Ecogeographical Land Characterization map (ELC) for the Iberian Peninsula and Balearic Islands developed by Parra–Quijano et al. (2012a).  The ecogeographic range in the populations laying within protected areas was also evaluated.

it was not possible to generate a similar map for the ecogeographical analysis of the populations occurring in the Canary Islands due to the insular character of this territory, rugged topography and the scarcity of meteorological stations.

Results of the ecogeographic analysis in the Iberian Peninsula and Balearic Islands for the prioritized food and forage & fodder categories are available in the following link.